This is what the Japanese might call forest bathing. I am standing in the centre of a natural quadraphonic sound system with birdsong coming from all directions, and the gentle tumble of a river as their undertone. The air is still and sun is streaming in through the leafless oaks. Oaks in their hundreds. I’m leaning up against one of them, my back against the pad of moss whose green is almost neon in this early morning light. By my feet honeysuckle is emerging, declaring with its first soft leaves that spring is on its way.

To my right there are two oaks, each maybe fifty feet high. They are tall and slender, with the first sets of branches appearing after around twenty-five feet of upright stretch. They are being used as supports for logs, like bookends. The woodland I’m in, Force Knott, is sensitively managed so that the oak trees are just right for the now rare craft of swill making. There’s a deep feeling of calm and harmony. The birds have not stopped singing – they are as constant as the trees – and from my place in the heart of the woodland I can barely see its edges.

Rob and I scheduled in today’s meeting with Lorna Singleton at the last minute, and because we already had a meeting booked for this afternoon, we know we only have the morning to do an interview and take photographs. I thought that we might feel rushed. But the moment we arrived, we were drawn into the slower time of woods. Lorna and Owen Jones, who work together here (Owen trained Lorna in swill making), need to make three deliveries of logs this morning – they sell a small amount for firewood – so we have an hour or more to wander through the woodland, soak up the atmosphere, and simply stand and stare. The sound of the quad heading off with a load has passed, and I’m left with birdsong again. A trio of mistle thrushes has just fluttered up from the trees above me. In the distance there’s a racket of birds whose startled cry I don’t recognise. Closer, I can pick out the call of a blackbird. And then a yaffle – a green woodpecker taking flight.

I’m taken aback by the idea of new shoots coming from the low bases of cut trees, and the way that this woodland, even though most of the trees are perhaps only 50 years old, is in fact ancient. The root systems of the trees have been in place for hundreds of years – trunks are removed, and then regrow, and are then removed again. It’s like a treasure trove of energy and is the ultimate in renewable resource: a circular economy maintained in a slow and simple way. 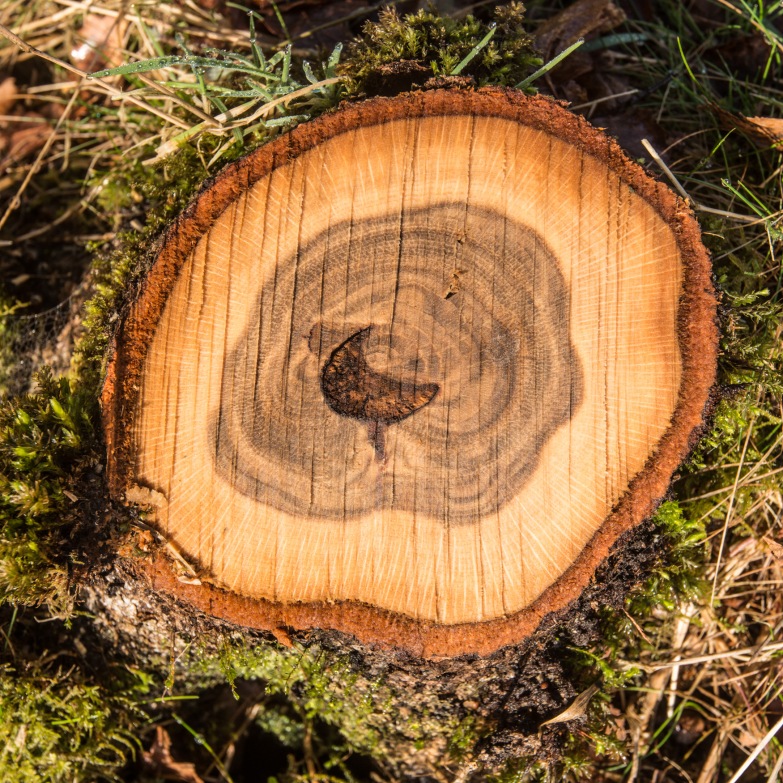 Lorna and Owen are back for their third load. They stack thirty-five logs, each of about 6 feet long, onto the quad, clearing a pile that originally had one hundred in it. I ask if birch or oak burn better in a fire. Birch is good to get it going, burns nice and bright, whereas oak is good for a longer slower burn once the fire is established. The logs wedged between the two oaks I was standing with lower down the hill are all birch, cut at the end of last year. They have been split down the middle then laid to dry. They will be ready for fire wood this coming winter.

Around us most of the trees are oaks. Lorna says the sap has started to rise already in the birches, so they will be cut first; there’s about two weeks left to cut the oaks before their sap rises. The woodland is thinned out but not clear cut. That way there is a perfect balance of shade and light: this allows for good seed beds and more biodiversity, and ensures that the new shoots growing from the stumps of felled trees will grow tall, powered by the energy in the roots, and reach high for light. If the woodland had been clear cut, which is often the case in commercial forestry, new trees would branch out and wouldn’t have the long straight trunks that are perfect for swills. The felled trunks will be peeled, or stripped, and the thin lathes of oak set aside and soaked, ready for weaving.

Owen says they work slowly. Lorna laughs and selects the word ‘methodically’. They like to get to the end of each day with the job in hand completed – neat piles of counted logs, rather than haphazard detritus of felled trees to be sorted on another day, or another week. They both love it that way. Steady and organised.

While Rob takes a picture of Lorna, I talk to Owen. He is sharpening his chainsaw, adding a rhythmic accompaniment while he tells me about the man who taught him to make swills, passing down a tradition that is rooted in sustainable woodland use. Swills, which are  strong and extremely beautiful, were once used to transport all manner of things, including potatoes and bobbins. Their use began to reduce from the 1930s and today, Owen and Lorna are among a tiny handful of swill makers in England (there are only two others, both of whom were trained by Owen). Most of their swills are ordered and find their way into everyday use. A smaller number are sold through galleries, and who knows, those who buy them may be more interested in their beauty than their usefulness. 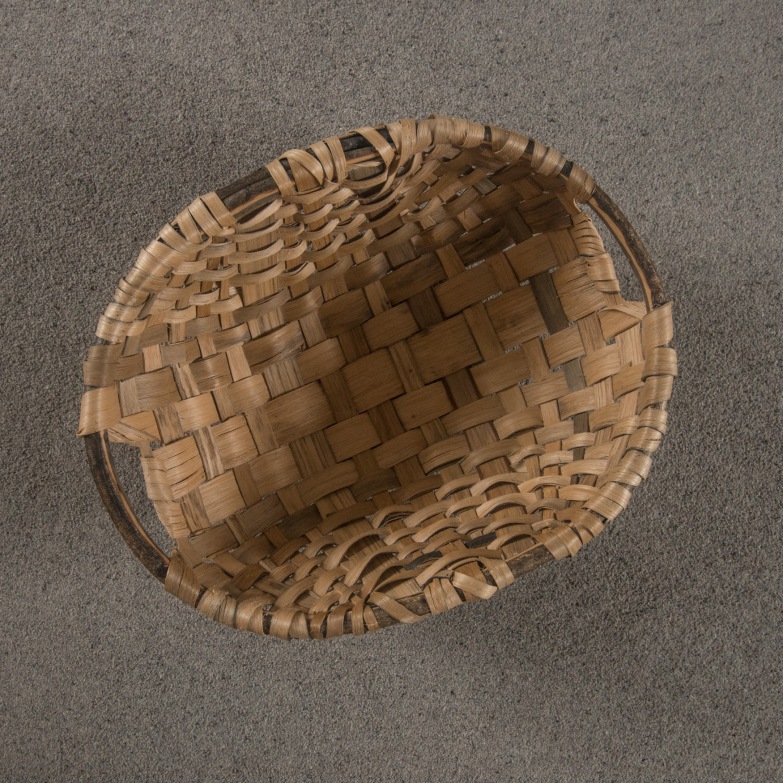 I move down behind a lip of land to record an interview with Lorna while Owen fells a few trees, his chainsaw cutting into our conversation. There’s a woodpecker hammering above us. Lorna tells me how right it feels to be working outside, and to be working with oak, and that she wouldn’t want to do anything else. With the sun shining it all seems so simple but I know there’s a lot of effort and demanding work as well. The weather is not always kind, and working in the woods requires a lot of lifting, sawing and hammering, and a great deal of strength and stamina is needed to make swills. It’s a physical job, but one that allows submersion in woodland for many hours at a time. I wish I could stay all day, and come back again tomorrow, but my own work takes me elsewhere.

The interview with Lorna and her image will feature in The Long View book, which will be published in June this year to coincide with the launch of the exhibition in the galleries at Grizedale Forest.

Owen Jones and Lorna Singleton have their own websites where you can view their work and find out about courses and workshops:

And if you’d like to find out more about forest bathing, and the health benefits that have been studied, this is a reasonable place to start: 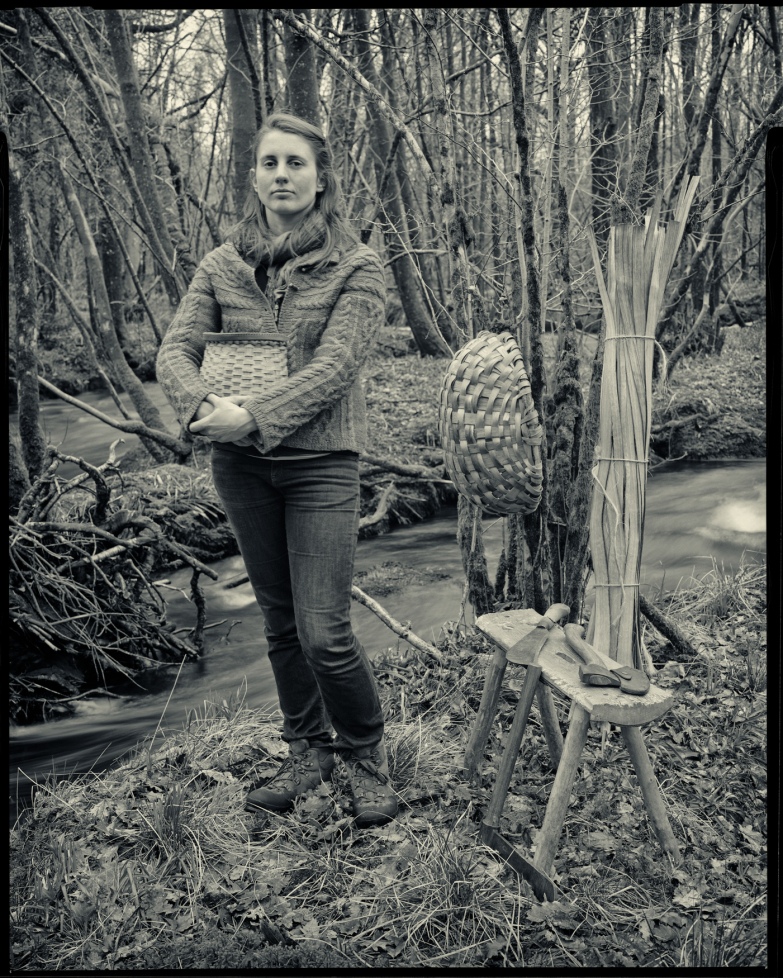