It has been a year since we began our repeated walks to these seven trees. Winter’s rains, winds, snow and frost have played with each one; a spring has teased new life into them and turned the land around them from pallid sleep to green; summer has given them warmth and light; and autumn – perhaps this one more than any other in the last decade –has celebrated them and their neighbours as a brocade of shine and colour. 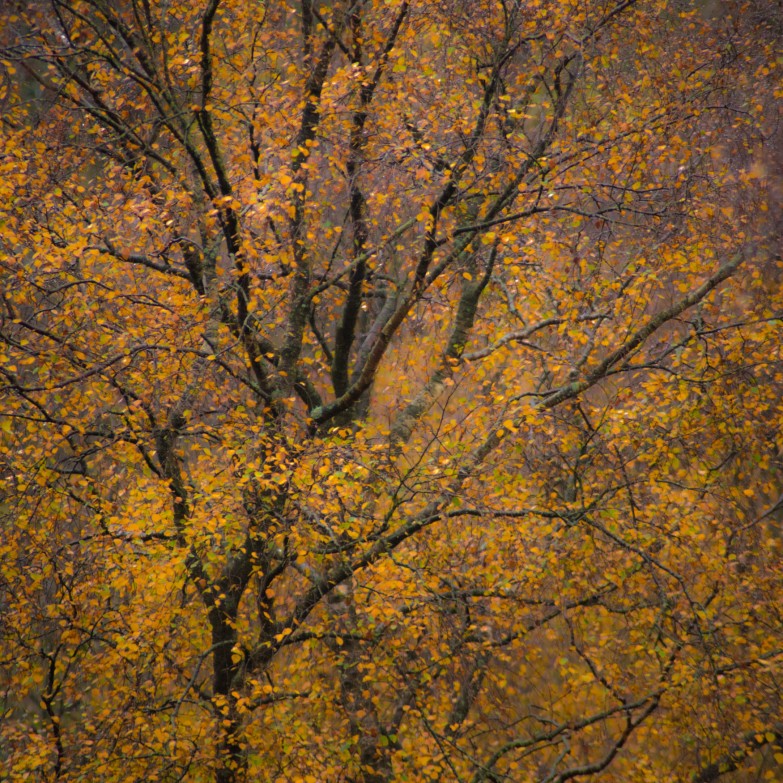 On our walks to the trees and our many hours sitting with them we have been brought into states of elation, have been left drenched and cold and we have had extended moments of stillness and peace. Our time with them has come with the watching of sheep and shepherding, of ravens, peregrines, robins, knotts, chaffinches, goldcrests at play. From beneath them we have seen the stars brighten and the moon rise and fall.

These seven trees have become markers for us in the undulating Cumbrian landscape. They are upstanding beacons in a wooden constellation; they are fixed points and because we have walked between them they are connected not just by rock, earth, fell and river but also, in our minds, by our footsteps. They have come to mean a lot to us and we’re feeling quite protective towards them.

So these are our own special seven, and it has been a pleasure to introduce them, personally, to more than three-hundred-and-fifty people through school work, college visits and public walks. We’ve discovered that each of these people has his or her own reason to love trees, or has a favourite tree of their own. Every person we talk to sees something remarkable in trees, and is touched in such a way that suggests that trees’ meaning to us makes them more than just a physical entity. Over time they might have come to be named with ‘human’ terms, such as trunk and limb, but they are entirely other than us, and the fact that they have become so symbolic says something about the mysteries they hold. Despite ever more detailed science emerging about the way trees behave, they have much about them that we cannot understand.

We cannot see them growing, yet they do. We cannot witness leaf buds opening, yet they do. We cannot observe the mycelial connections among root systems that are as comprehensive and complex as the action of billions of synapses in each human brain. Just yesterday a tree fell, in the hour that passed between our walking beneath it on our way northwards, and having to pass around it, on our way back southwards. To have witnessed that falling would have been a highlight of our year (providing we weren’t directly underneath it!). But like so much else about trees, it happened away from human witness.

The ecologist and general guru when it comes to trees, Oliver Rackham, believed that ‘of all our fellow creatures, trees are the easiest to misunderstand.’ Our own meetings with these seven trees, and the others in their locality that we have come to know along the way, have urged us not to lend them human characteristics (how to presume a tree is sad or lonely?) but to sit with them and through close observation get to know them a little better.

Unlike trees that are part of woodland, these lone trees have been free to find their own shape. They respond to rock and wind, and for the alder and birch, to the flow of water, above which they spread. From our human perspectives they seem to have taken on a personality – the hawthorn seems tenacious, clinging onto limestone, and sometimes a little sad; the rowan gentle, soft and almost submissive; the pine, proud; the oak, determined …. but we cannot even guess whether these labels fit. All we know is that each tree is doing its best to be a tree, and our experience of it is, consistently, one of wonder. The qualities of strength and fragility coexist; each tree holds its place and its landscape in a way that we find utterly beautiful; we watch birds playing in the branches and see these trees as a force for life. Each one is a part of the fabric of interconnectivity that is the basic nature of this planet and we are loving the way our close attention is rewarding us with our own sense of deep connection.

Looking back in time it’s no secret that trees have been revered and used as symbols for so much – for growth, for fertility, for gods, for loss – and today, amid current concern about habitat loss and species decline, trees are often used as a symbol for nature in general. Scroll back two thousand years and you’ll find images of a tree goddess, or Yakshi, in India – another five hundred years later the writing down of sacred Hindu texts including the Bhagavad Gita referred to the leaves of the sacred Pipal tree as the texts themselves. The ‘Tree of Life’ has its first recorded mention in Mesopotamia, as much as six thousand years ago, and is a theme that has been repeated many times over, in many different cultures. In Norse mythology Yggdrasil, the ‘world tree’ was thought to hold up all of creation.

That trees give so much to so many other living things, in physical and spiritual terms, is perhaps one reason for our veneration of them over time. The gentle interaction of tree, air, soil and living creatures might have helped it become one of the most potent symbols for life, and for the continuation of life that relies on mutual relationships of give and take, and give again. Is this what the Buddha was pointing to, so the stories go, when he was sitting under a tree and gestured to the earth in a moment of enlightenment?

For our own part, this is something we have noticed through our ever deepening relationships with these seven trees: this cycle of give and take, and give again. There is a power of rejuvenation that comes from being outside and being with the trees. Each visit to each of the trees, regardless of the weather, the company we’re in, our own states of mind, has been a contribution to our outlook and sense of ourselves in time and space and to our state of being – an infiltration, perhaps, of a sort of inner calm and interconnectivity that seems to be at the essence of all trees. And while we’re increasingly feeding our curiosity by learning more and more about trees’ behavior, each visit also brings into focus the wonder of the natural world that so often defies explanation.

In the next six months, we’ll be spending yet more time walking and with the trees, while also bringing together our observations and thoughts for the exhibition in June 2017 (launching in the galleries in Grizedale Forest) and for the accompanying book: photography, prose, poetry and installations that lend expression to the trees we have met, and the way they have inspired us.