Lapwings dance in a white sky, a ritual teasing of pairing, mirroring, diving and rising

Curlews send a watery call to the air

Spring is nudging its way in and the birds celebrate it, but we are dressed for winter. While the clouds part from time to time to reveal blue, the wind is cold and fierce, and on the exposed ridge of the limestone scar its relentless blast makes your eyes water.

We headed out last Friday to walk from Great Asby village to the Little Asby Hawthorn. We wanted to check that paths and fence crossings hadn’t been damaged by the winter storms, and get a feel for how long the walk might take, in readiness for the public walk on July 25th. It’s not a guarantee, but we’re hoping that in the summer we’ll be spared the force of the wind and, well, you never know, we might get a warm and still day.

At a height of 360m above sea level, the hawthorn rises from the crevices of huge limestone slabs on the edge of a rippled sea of grey-white stones. Walking to it from a distance emphasises its extraordinary location – rooted in a place where few trees grow, all the more remarkable for its isolation. When you stand next to it, or hunker in the shelter of upturned stone slabs, you can appreciate the view it commands: south towards the rolling backs of the Howgills, east towards the northern Pennines, and west towards the Lake District fells.

Above it, always, is a wide sky. It’s an exposed place, and a beautiful one, with a very specific ecology because of the current conditions of weather and grazing, and the nature of the limestone pavement, an ancient seabed that was pressurised under glaciers and now crests to form the high points of the Orton Fells. The limestone rests in clints and grikes, a series of ridges and clefts, some of which are very deep. Peer down these and there is a hidden world of greenery, some of it very rare. The hawthorn – despite the wind, despite the sheep, despite the exposure – rises out of this stony world as solid and sure as if it was growing inside the shelter of a wood. Its shape, though, in the abrupt curve of its main trunk and a flush of contorted branches pressed to the sky, reveals its long slow conversation with the wind.

A few miles north of the hawthorn, and several hundred metres lower in elevation, the houses and farms of Great Asby nestle around its church and (often dry) ghyll. The name Asby derives from Askr (Ash) By (farm) and many of its buildings hundreds of years old. We headed out of the village and gradually up hill along a lane lined with leafless trees, many of them ashes. The sound of light wind is overlaid with the call of birds – sparrows, finches, tits, crows, curlews. 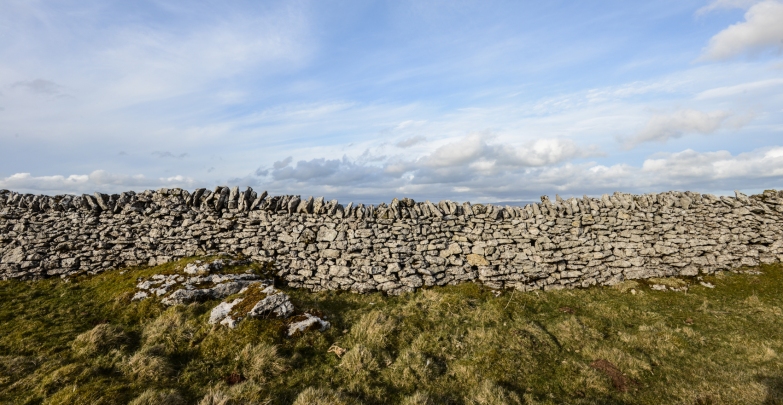 Beyond the lanes, the warmth of the sun is whipped away by a fierce wind and we press on, heads down, steadily gaining height. The land feels bare with winter-pale grass stretching for miles. Trees were cleared long ago to make way for livestock (the word ‘field’ comes from ‘felled’) and today the limestone walls, picked out from the land they now segment, are providing shelter for the ewes and lambs that, like us, prefer to be out of the wind. But it’s not all hard: the openness of the landscape here is refreshing, and the tracks are easy to follow.

We pass through a few gates and come to the last fell wall before Little Asby Common. After a final climb we’re rewarded with a view across the common and south to the Howgills. We can see Sunbiggin Tarn, just below Little Asby Scar, which holds its own precious place in this landscape and is home to birds including lapwings, redshanks, curlews, grebes and whooper swans. And our own favourite for its incredible drumming routines, the snipe (which we once mistook for a bittern – you can read more about that and see some pictures of Sunbiggin tarn in our somewhere-nowhere blog here).

On the top of the common you could be distracted by the limestone and the secrets it holds in its grikes for a long time. Species sheltering here include green spleenwort, brittle bladder fern, wall rue and the aptly named limestone fern, and there are collection of small rodent bones left, probably, by birds. We press on to the Hawthorn to greet a tree that is beginning to feel like an old friend. Even though there has been little change to it over the last four months – all of them leafless – each visit offers something new. Today it was renewed amazement at its strength in the face of extreme winds. We stopped for an hour, refuelling with sandwiches and a cup of tea, and then photographing and writing.

The Little Asby Hawthorn had its first poetic intervention with a dressing of words that are part of a poem Harriet wrote on site; close up we saw that birds too had scribbled their white signatures on the bark.

Our walk away from the tree seemed balmy in comparison to the exposed tops of the common. Good tracks leading between farms and across fields, with a bridleway taking us all the way back into Great Asby and the Three Greyhounds pub …

We’ll be leading a public walk to the Little Asby Hawthorn, starting and ending in Great Asby, on July 25th. If you’d like to join us, click here to book through the Lake District National Park. If you can’t make that date and you’re a member of Friends of the Lake District, you can join their special members walk with us on August 1st. And of course, you can go there yourself at any time.

If you do get the chance to sit with this tree, or to stand on the land above it and look down on its gnarled form, you’ll get a sense of its resilience and maybe, just maybe, feel a sense of awe. To us, although a hawthorn bears both berries and flowers and can self-pollinate, it has the aura of a female. It’s a stalwart. A stander. An overseer. A strong representative for other trees, like the woman who stands up to frackers or drillers and refuses to move. Of course men do these things too, but in this instance, in this tree, there is a sense of a strong woman, a mother … perhaps it is because she is so firm and I am quivering in the cold.

One thought on “Walking to the Hawthorn”