On the last two Sundays we have forsaken the warmth of a cosy bed and headed out into the cold. We wanted to share what the trees witness: darkness, stars, the quiet of night, the half-light that comes with a full moon in a cloudless sky, and the coming of day. We were rewarded with fire and ice.

Trees have a circadian rhythm in much the same way that all living things do. At night they enter a state that we might call sleep; a slowing down of functions and a relaxation of their branches. It’s as if there’s a temporary withdrawal of the senses. And for a deciduous tree, with the loss of leaves in winter, a quieter phase of ‘sleep’ extends for months. 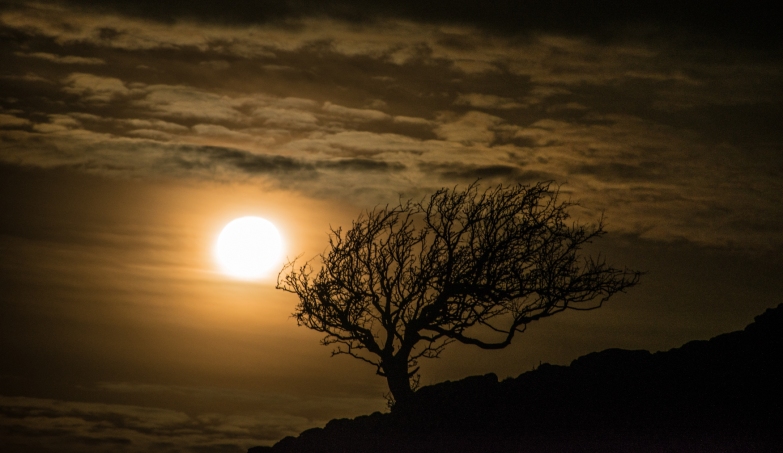 We walked to the Little Asby hawthorn two nights before the Supermoon reached its fullness (when we knew it would be obscured by cloud). The sky was clear. We had no need for torches as we walked across the open fell. The night was absolutely still and when we sat beneath the tree we could hear nothing except our own breath.

The moon was a pale orb and it sank, westwards, as if guided to the horizon by the branches of the tree. The land darkened and the pin-prick stars became brighter. The stillness of the night seemed to deepen the sleep of the leafless hawthorn.

Being under the stars, undisturbed, is a rare treat: sharing this with the quiet twisted hawthorn made it feel all the more special. There is something sacred about moments like this and the simple experience of watching the slow drift of constellations. Our slowing down was slowed even further, if that’s possible, by the darkness. We rested with the tree for the last hour of night, caught up in the stillness.

Just as darkness began to give way to a hint of light, an owl called out, a repeated welcome to the day, and as the sky became paler ground-nesting birds all around us added their voices to the  morning. The coming of light was gradual at first, so that night-black became cobalt, the stars faded and disappeared, and a soft orange crept up from the eastern horizon. It seemed as if the dawn would be subtle and pale, held under a lid of cloud, until the sun’s rays broke through and the sky turned to fire. We had walked under the brightest moon, gazed at an infinite starscape, and now here we were cheering at the beauty of a dancing dawn sky. We were elated for hours. 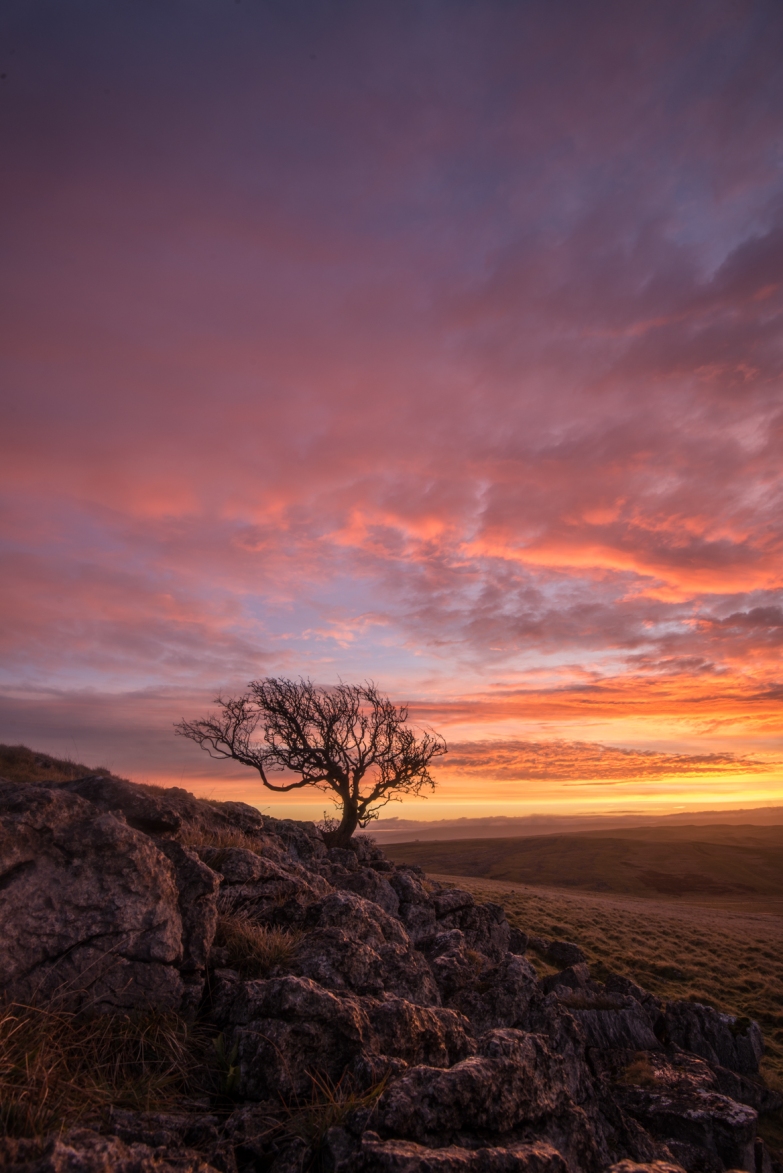 The following weekend when we saw the forecast for early morning mist on Ullswater we decided to get up early once more. After a late Saturday night at Kendal Mountain Festival we went to bed with slightly raised adrenalin, the kind that you experience when you know there’s only a few hours’  sleep to grab before you’ll be getting up to set out on an expedition.

The alarm went off at 4.30am and we stole ourselves away with a flask of coffee. In Glencoyne Park we crunched through snow in the dark, winding beneath sycamores, ash trees, hazels, birch and hawthorns, our torches lighting up their lichen covered branches. As we gained height the mist curled back from the surface of the lake, revealing a mercury pool edged by black hills. 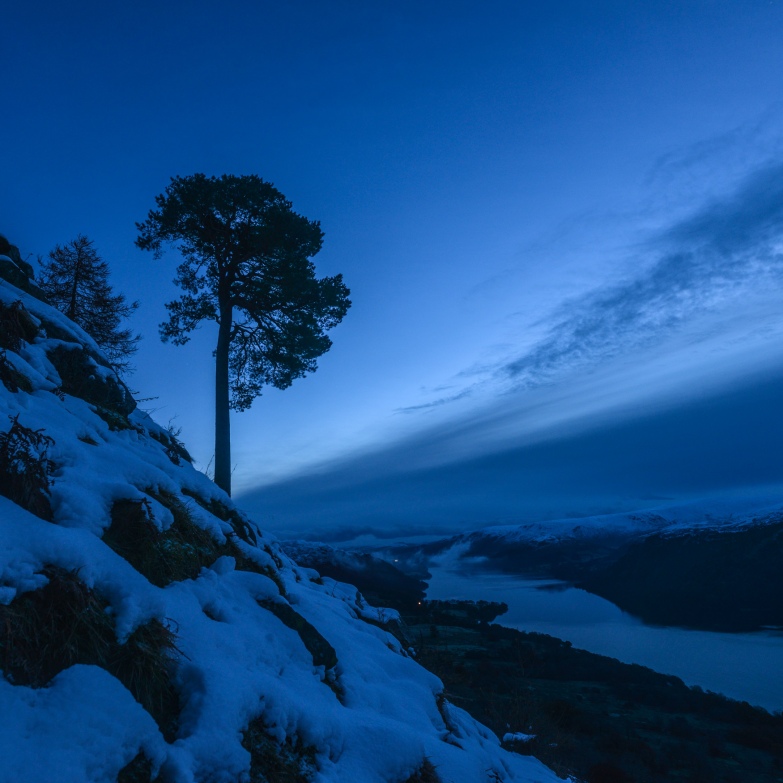 This night was not so still, nor as balmy, as the previous Sunday at the hawthorn. The moon had waned to half its size and hung, as if suspended, high in the west making the night sky blue and turning all the snow to pearl. It was very, very, cold. By the time we reached the Glencoyne Pine, which sits at a height of 420 metres, the swift wind was sending freezing air in our direction. 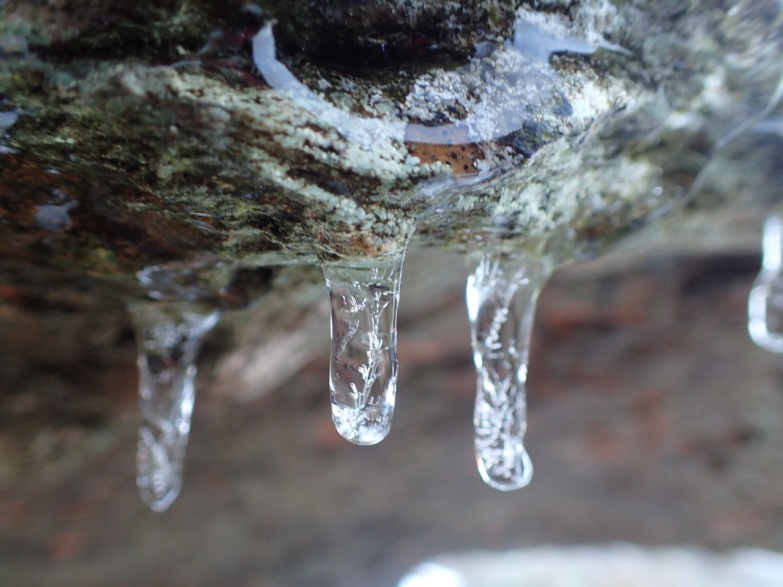 Snow quietens land and makes everything seem asleep. It also makes slopes a bit treacherous, so our experience of a sublime and cold land was also an experience of slipping and holding on, in between quieter moments. We sat with the tree, its rust red trunk a tower of strength and certainty in the half light. As the sky lightened in the east, banks of clouds rolled over the fells.

Dawn was pale and grey but, as it had been at the Hawthorn, there was drama to come, and when the sun rose above the clouds it illuminated the snow-covered fell, larches, beech trees and bracken, adding golds. With the colour of fire in its bark, the pine did what it does best: stands strong, above it all.

We walked away from the pine reflecting on our two Sundays, one week apart, seemingly embracing the coming of winter. Two Sundays, two nights, two sunrises. Darkness and light. The best of times and an affirmation that it’s always worth getting up early.

6 thoughts on “A Tale of two Sundays”